I’ll be honest. Traveling has it’s ups and downs. Ups are the freedom, the level of independence, the belief in spontaneity, and a feeling of purpose. The purpose stems from feeling present and feeling like I’m pursuing some of the qualities that lead to my definition of success in a life. But I also miss stability. Sometimes I feel like I’m wandering in circles and circles waiting for some guidance or calling to go anywhere. It’s not very handsome to be so available for anything anytime anywhere. I don’t mean that in a dating sense. I mean that my whole world right now consists of the few items I am carrying on my back. Each day I am searching for a new place to spend the night, a new friend to pass the time with, and some type of way to spend my time. If anything, it’s made me crave a job a bit. I’m glad that I’m experiencing this. It’s making me more motivated than ever before to focus and work hard.

The last month or so I’ve been moving around the Himalayas and I hate to admit it but I have been making circles. I went to Kalga where a rainbow gathering was happening. The first night I got there we trekked in the dark about three kilometers past rushing rivers on the side of muddy hillsides until finally we saw the swarm of lights filling the hillside. Although the first town we arrived in wasn’t Kalga, it amazed me that such a vibrant bustling place could exist without any connection to roads at all. 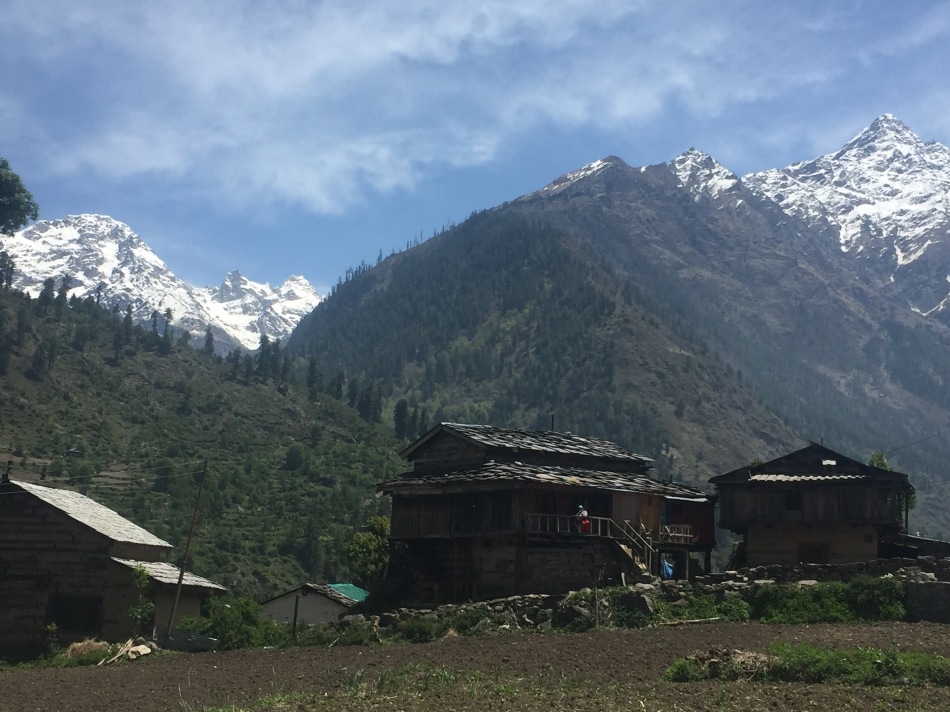 We stayed one night there and then continued for Kalga the next day. Arriving after a few hours of trekking in Kalga, I was enchanted by the small town. We were in search of the rainbow gathering. 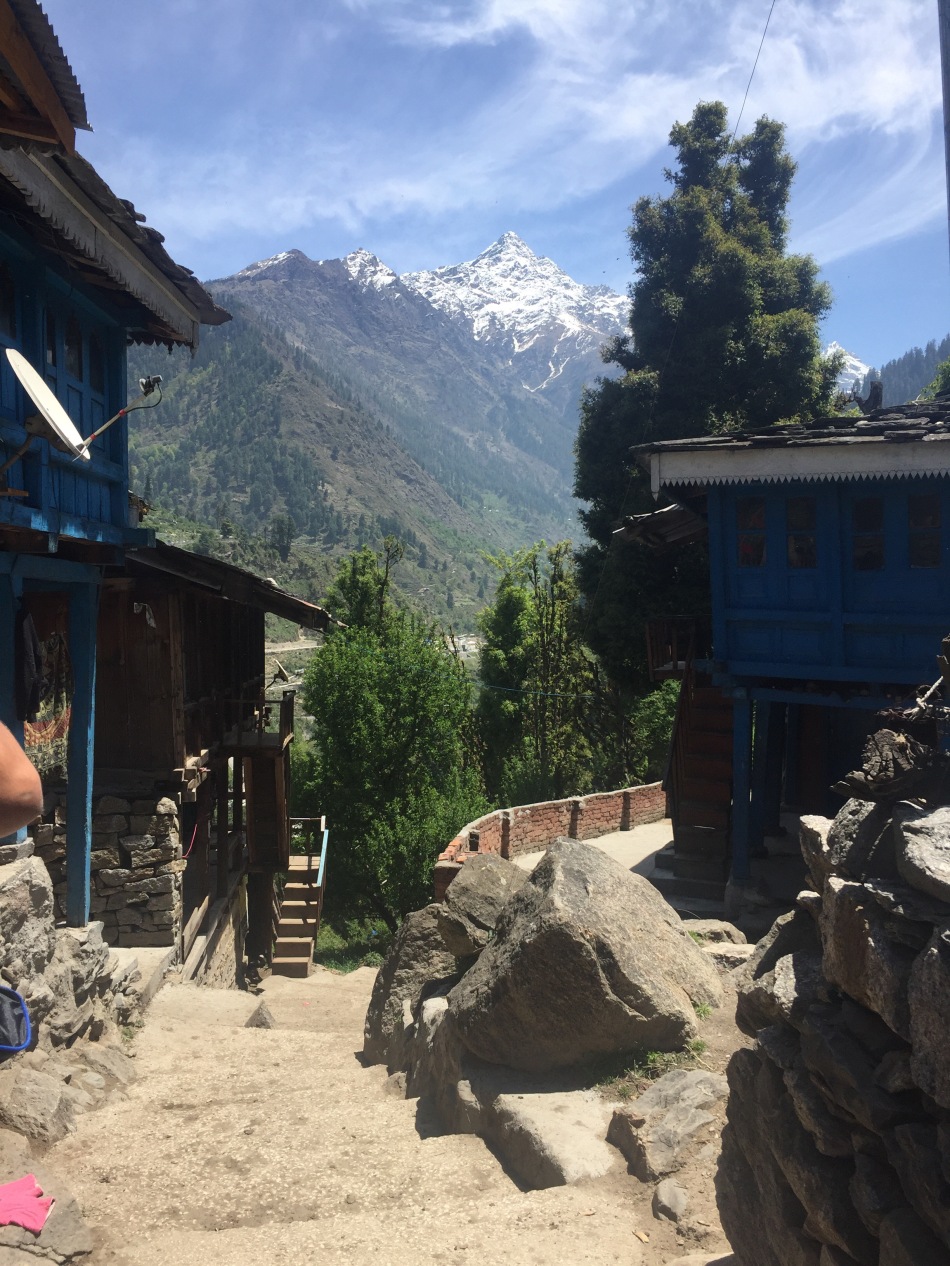 “You don’t want to miss a rainbow gathering!” I told my two friends before we even began the journey, although I, myself had never been. We embarked on the journey with high hopes of finding this gathering. It’s an international gathering of dirtbags essentially. Jugglers, hoola hoopers, and maybe even some slackliners camp in designated spots for sometimes a month at a time. Kalga was supposed to be the base camp for the gathering. But when we arrived in the small quaint town with only 1 store and a few guesthouses, the information we got was scattered.

“Oh it’s canceled.” A shopkeeper said blatently.
“No. It’s not in Kalga, it’s in the town on the other side of the mountain.” A traveler said

My friends glared at me.

“Well, let’s trek to Kheer Ganga?” I offered. I was all up for that despite the biting cold until my shoes broke. I felt defeated and afraid to walk 30 km of challenging terrain with a pack on my shoulders and no protection under my soles. But beleive it or not, trekking was amazing. I felt the mud sinking in my barefoot toes, the way my toes stuck to the rocks as I hopped. I felt alive and I felt thoughtful.

Then after a night near the boiling hotsprings, two days of passing glaciers(which I had to barrow some shoes 4 sizes too big for), seeing adorable families of sheep, and thouroughly trashing my feet, we remarkably arrived at the rainbow gathering. We were amazed! We found it!

“Welcome home!” The campers greated. We jumped in elation that we found it! I told them I’d be back, and that I just had to go to town to find warmer clothes, shoes and a tent. But I didn’t return. Ansty as I was, I decided I needed to go as quickly as I had arrived. Maybe I was anxious about getting my hands on a pair of shoes. Maybe I was wimping out about the cold. Maybe the grass was just a bit greener on the other side.

Without any goodbyes I packed my bag and left for Dharamshala. Dharamshala was warm and the hostel I found was almost too good. There was free breakfast, a choice of an omlette or 2 potato pancakes and chai, free laundry, big warm blankets, and a crowd that seemed to all have gotten stuck there too. Not to mention the cost per night was about $4.30 total. But the more I felt the urge to stay, the quicker I left. Only one day of trekking around, a day of sending a package home and visiting the Dhali Lama, and I was on the move again. Except now I was thinking I wanted to go back to Kalga.

(Photo: a goodbye hug from folks at the hostel)

“I’ll get a tent and I’ll spend a week at the Rainbow Gathering. What am I doing? I never should have left,” I said to myself. So I took an overnight bus to Manali. Manali blew me away as well! Staying in a guesthouse with a 180 degree view of adjacent cliff sides, we could see three cliff waterfalls from our room. I was traveling with a friend I met in Dharmshala at this point. The room was a blistering 100 rupees a night or $1.50 and again, I could stay forever!! This place even had a kitchen where we cooked home food. The town was cute and full of trekking trail heads. I was in heaven. Two nights later I left, but not for the rainbow gathering.

“I want to go back to Rishikesh. I need to see my Hindi teacher again. I’ll go there for a few days and learn so much. Plus I have one free night for writing a review for that hostel I stayed at,” I thought. But when I got to Rishikesh I felt dizzy with misdirection. Where am I going? Why do I feel so aimless? A friend greeted me there and insisted that I not take Hindi lessons.

“I got a present for you!” He said, holding out a Teach Yourself Hindi book. “I’ll be your Hindi teacher!” Although he had really the best intentions, I spent the next few days in Rishikesh exploring and rediscovering the area. We swam in an epic waterfall one night in the dark during a storm. It was wonderful and one of my favorite memories so far. The entire pool of water would light up purple with the flashes of lightning. But then a few days passed, and I left Rishikesh without improving my Hindi at all. The book is helpful and all, but I am not making progress as swiftly and soundly as I did when I attended Hindi classes.

“I’m switching it up!” I thought, encouraged by a friend’s invitation. “I’m going to North east India! Sikkim!” I headed to Delhi with no reservations but hopeful that I could bribe my way into a seat on a train. (That’s worked pretty consistently in the past). After a night of anguish and getting vehemently kicked off the train in Delhi, I looked for other options. It looked like it would be about a week until I could get a seat. Seeing that I was defeated, frusterated and feeling more aimless than ever, my friend in Delhi called in all the favors he could muster in order to try and swing a ticket for me. It’s a 30 hr train ride to Sikkim and having a seat is kind of a necessity. With only a month left in India I felt desperate to make the most of my time, and being stuck in Dellhi for that long seemed unberible. Delhi is hot, congested and boring. I mean it might be interesting if it wasn’t so impossible to even go outside during sunlight hours. It is way too hot right now!

But then I got a call that gave me a bit of direction. Cancel the tickets! I told Hemant, my #1 friend in India and the only good part about spending time in Delhi. The next morning I was on a train to Chandigarh where I am now. I am completing my SYLE (Servas Youth Language Education) program where I’m required to stay a week with four different hosts that are members of the organization Servas. It’s an amazing program that I almost didn’t complete, but luckily Chandigarh had a home for me.

But being here for a week has given me time to rest and to be restless. I can’t stop thinking about career prospects. What the hell am I going to do with a biology degree? How will I ever find someone who will pay me? Logically, it’s a silly question. I’ll find someone who will pay me. But my heart is feeling afraid for the journey of my professional life. Look at me, running in circles, for what? I don’t even have a competitive resume! Big life directions plague my mind… grad school? work experience? work remotely? MBA? Foreign service? Peace corps? There are too many options and there’s not enough clarity!

Tomorrow, I hate to admit it, I’m returning to Manali. I’ve decided to go to Leh, and there’s a pass from there. It’s a 10 hour journey to Manali and I was just there two weeks ago. But now some friends from the Rainbow gathering have moved there, and I feel like it’s my chance to make sense of all this again.

I frequently am finding direction as well. But lately, I’ve been feeling a bit lost. I wonder if this is something that I had to get out of my system now in order to find deep satistfaction later in my life. But then again… I don’t by any mean think it’s the end. And even if it is, I’m only half way through my journey. I miss home so much sometimes. It’s tough to be alone for so long. I found myself on the back of a moterbike today silently shouting love for each of my friends back home.

But I’m happy to be alone. I don’t think I’d be asking the same questions or seeing through the same lense if I wasn’t… even if sometimes that means just going in circles. Hopefully tomorrow Manali looks a bit different than the first time I was there.

But all of these places have been lovely. I don’t want to always be searching. I want to just spend the last month of my time enjoying the places I find, moving slowly, and being present. Although at the close of writing this, I feel that articulating my thoughts is giving me more aim as I speak.

3 comments on “A Bit Aimless Lately”

Hello, my name is Raleigh and through my writing, my dream is to share stories and records that empower people to jump in to the unknown!